Posted by Leissa at 12:18 PM in About us & Our Mission Statement at Leissa's Hair Studio 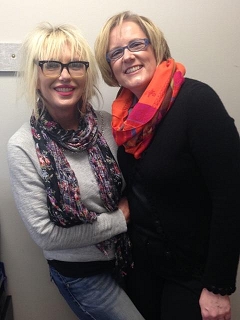 Historic Downtown Menomonie is fortunate to have a diverse selection of businesses offering a wide variety of services to residents and visitors. Of those, few have been in business as long as Leissa’s Hair Studio & Day Spa, located at 226 Main Street.

Owner Leissa Berenschot opened her salon 29 years ago. Her passion for small business, fashion and the salon industry runs in her family--- her mother and aunt were both into fashion and several family members are entrepreneurs. Notably, all of Berenschot’s siblings that are business owners located their businesses in the downtown of their respective communities.

When Berenschot’s sister attended UW-Stout for fashion merchandising, she urged Berenschot to open a salon in Menomonie. Though she had been offered a job in Chicago, Berenschot saw an ideal opportunity in this community. “There were a lot of people here that wanted something much more than ‘an inch off’--- they wanted trend,” she observed.

It’s only natural that Leissa’s is located downtown -- a place that was “always hip and cool,” Berenschot points out, adding that its proximity to UW-Stout is a significant asset.

The salon was originally located underneath the campus arts store. Four years later, the business moved its location to Main Street into what was the former

Ben Franklin Store. In a twist of fate, Berenschot recalls going to that store as a young child.

Leissa’s has expanded over the years, both in location and available services. Most recently, esthetician Barbara Ziehr obtained her licensure and graduated from the Aveda Institute in Minneapolis in August. Ziehr was originally a customer at Leissa’s after moving to Menomonie five years ago.

After she began working at Leissa’s front desk, Berenschot approached her about becoming a licensed esthetician. A year ago, Ziehr decided the time was right to pursue her passion for skin care and is continuing training with Dermalogica.

Throughout the coming months, Leissa’s will feature several specials and events for those who would like to address their skin care needs with Ziehr. Leissa’s Annual Open House on Dec. 12 and 13 will feature gift certificate purchase promotions in addition to other deals.

Christmas is a special time at Leissa’s. Berenschot believes in giving back to the community, a mission of "passing along good to the area and globally" that Leissa’s shares with the Aveda product line carried at the salon. "We’re proud to be a part of that,” Berenschot said, reporting that one year the salon even donated furniture items to a family in need.

Over the years, Leissa’s Hair Studio & Day Spa has established itself as an anchor business downtown, and it’s clear that they are always up to something new.

With all that downtown Menomonie has to offer, Ziehr adds, "Who wouldn’t want to be here!